Over the years we have assembled a variety of tools for evaluting tuner performance. Most of these are internal home-grown command line utilities and scripts which perform some superset of comparable end-user applications, with a particular emphasis on automation and logging statistics that regular users typically wouldn’t need.

We use these tools for a variety of purposes:

We have been running the tools againt our driver for the HVR-955q for months on a regular basis, at this point mostly just to catch regressions that might have snuck in during development for other tuners. However as a result of some unrelated work, I happened to install the latest open source media_build tree, which included the recently upstreamed open source driver for the HVR-955q. This provided an ideal opportunity to do a bit of comparison.

Why compare our driver against the open source driver? As an engineer, I want to be confident that our driver works well, and being able to compare it against somebody else’s driver for the same device allows me to ask several questions:

In short, these are mostly sanity checks to ensure we didn’t do anything really dumb that we weren’t already catching.

Now for some pretty charts our scanner produced: 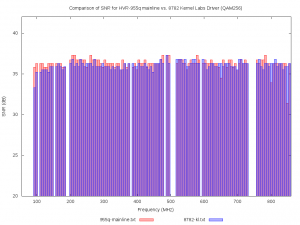 As you can see from the above, we’re locking on all the same channels (i.e. no channels missed), and the SNR is pretty much the same between the two (within 1dB). There might be a bit of opportunity for fine-tuning, but I would probably first need to make sure the means of computing the SNR are identical (i.e. the variation might just be a difference in the SNR algorithm). 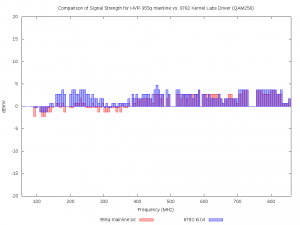 Based on the above, the we’re seeing pretty much the same trend for signal power delivered to the tuner (+/- 1 dBmV). That said, there does appear to be something going on in the open source driver where it doesn’t perform as well below 375 MHz, where if the results were reversed I would want to better understand what was going on there. This might suggest a case where the driver wouldn’t perform as well in weak signal conditions.

All that said, one thing I immediately asked myself when doing this test:

Why on Earth is the scan taking so long when run against the open source driver?

My initial thought was that perhaps there was some bug in our internal tool which was exposed when running against the 955q open source driver (although we’ve run it against other open source drivers countless times). That prompted me to look at the time-to-lock for the tuner: 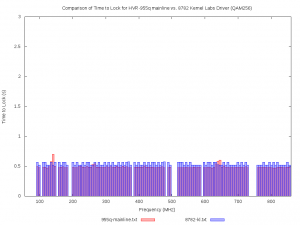 That looks nice and consistent (locking consistently within 50ms between the open source and Kernel Labs driver). Again, perhaps an opportunity for a bit more fine tuning, but nothing bad going on here.

Then I looked at the chart that shows lock time, including the time before the tuner gives up attempting to lock when a channel isn’t present. /Cue dramatic music here… 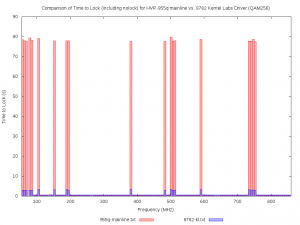 Going back to my assumption that my tool was broken, I tried the same test with the stock Linux DVB /usr/bin/scan tool. Guess what? I got the same results.

These tests were run against a cable plant that was essentially full (about a dozen frequencies out of 135 which weren’t in use). When the same test is run against an empty plant (i.e. unplug the cable feed), the problem is exacerbated:

Yup, it takes over two hours to do a QAM 256 scan of a cable plant where no channels are found. Ouch.

Why does this matter? Isn’t an empty cable plant a rare edge case? Unfortunately, it is not, especially for commercial customers. This is for a couple of reasons:

If stating a product is of high quality is the result of measurement, who among the people responsible for the open source driver is measuring its performance?

As I originally suggested in the previous blog post where I announced the availability of the Kernel Labs HVR-955q driver, the open source driver is probably “good enough” for consumers, but if you’re a business that depends on tuners working well, it probably makes sense to go with a product specifically intended for that audience.